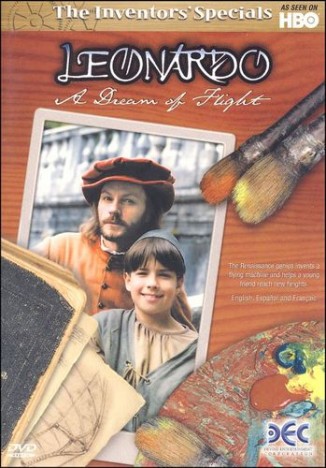 Leonardo : A Dream Of Flight

There was a time when the name “Leonardo” didn’t immediately invoke the answer “DiCaprio.” In fact, it may be wise to ensure that young viewers not only are familiar with, but understand and learn about the great genius of the early 16th century, Leonardo da Vinci. This production, part of HBO’s Young Inventor series, sets out to do just that. Set in 1500, the story follows da Vinci (Brent Carver) when he is already a heralded painter but intrigued with flight and mysteries of nature. He meets 11-year-old Roberto (David Felton), whose mother sells birds. Da Vinci befriends Roberto and the two provide encouragement for the other. Although the character of Roberto is fictional, the intellectual genius of the Italian Renaissance actually befriended two young boys whom he mentored and later remembered in his will. This movie examines an incident that da Vinci chronicled in his memoirs: a vivid memory of being fascinated by a kite in flight when he was only an infant. Filmed in Padua in 1996, Leonardo: A Dream of Flight is not only stunning visually, but an entertaining story with an educational backdrop. The Young Inventor series offers up excellent production values, strong acting, and powerful stories woven around true and historically significant tales. –N.F. Mendoza