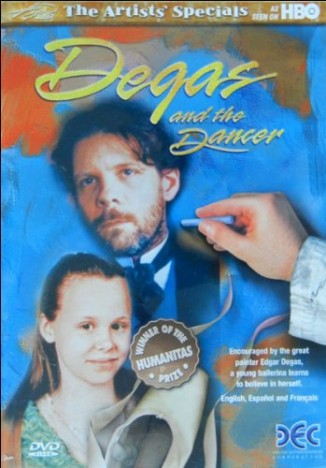 Degas And The Dancer

This 1999 Humanitas prize-winning video explores the intense working relationship of painter Edward Degas and ballerina Marie von Goetham. The story opens on a desperate and dispirited Degas forced into portraiture as a means of making a living. His disdain for “opera rats” turns to fascination when he encounters floundering ballerina Marie von Goetham. Degas becomes so obsessed with Marie that he hires her as a model, and the temperamental pair discovers a common devotion to their respective art forms. Through their relationship, Degas teaches Marie to ignore criticism, dare to make mistakes, and believe in herself. Marie teaches Degas to respect other people and, after he loses his own self-confidence, to live by his own advice–ignore criticism and believe in himself. This wonderful look at two struggling artists is full of beautiful dancing and fascinating glimpses of Degas at work in his studio. While the video is based mostly on conjecture and fantasy, the underlying messages–that artists pour great effort into appearing effortless and the portrayal of self-doubt as an insidious enemy that kills talent–are enduring truths relevant to any artist. (Ages 7 to adult) –Tami Horiuchi